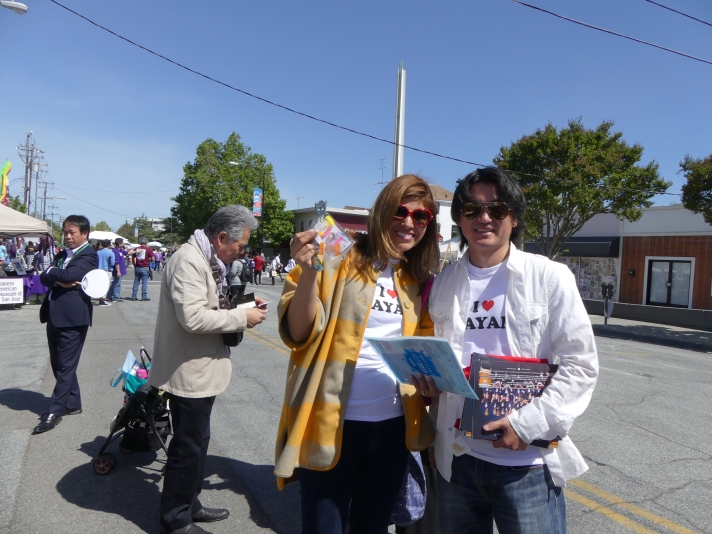 We are very happy that Shin, a native of Okayama, Japan, is the first Japanese national to be a part of the Sister Cities International Board of Directors. In addition to his work as an actor, he has spent a majority of his time doing non-profit work to help other countries in the fields of humanitarian aid, the arts, business and education. For more information about the Koyamada Foundation (Shin & wife Nia) see http://www.koyamada.org

Although we know that these types of events take a lot of time, planning, careful execution and lots of support, they are also some of the wonderful benefits of the sister cities programs and relationships.

Anyone who heard these young, talented musicians know that their teachers, conductors, assistants, families and sponsors have every right to be bursting with pride. They were wonderful.

Thank you to Matsuda-san for ‘modeling’ & Okayama East Rotary for providing the t-shirts to both groups of musicians and for helping make this concert a reality!

These two youth orchestras are amazingly different and amazingly good. They will each share their repertoire, led by their own conductors, but also will join forces and share the stage for two pieces.

Sixty eight young musicians from Okayama will be in San Jose for this event. And the San Jose Youth Symphony, fresh off their tour of Europe this summer and their summer camp, will delight you with their musicality and expertise.

Making this even more memorable is the tribute to peace between nations that this concert represents during this 60th Anniversary year of the establishment of the Sister City relationship between San Jose, CA and Okayama City, Okayama Prefecture, Japan, on the 72nd anniversary of the nuclear bombing of the city of Hiroshima, Japan. Hiroshima is sister cities with Honolulu, HI. The bombing took place on Aug 6, 1945.

In the current era of unrest in the world, we want to celebrate the good things that the youth of the world can bring towards a peaceful and beautiful future.